It is July 27th, 1987. For the people of Soweto, the sombre date of a hero's homecoming for an assassinated freedom fighter. For the apartheid regime, the funeral of a dangerous “terrorist” their secret forces had killed. A young radio reporter, Nigel Wrench, was there with a Marantz cassette tape recorder and a Sennheiser microphone, as police ordered all cameras to leave. The sounds on that cassette haven't been heard until now. Welcome to ZA87.

This was a time when mass political funerals had become mass political rallies. Tens of thousands of chanting, singing mourners would throng township streets. Just about all other political activity was banned by the apartheid state.

The police and army would attempt to stop running demonstrations that followed these funerals. Sometimes protestors were killed, ensuring that the terrible cycle of political funerals continued. The apartheid state – so ostentatiously religious - could hardly limit funerals. Or could it?

ZA87 documents what happened when Pretoria extended its repression to the dead - and the militant singing defiance that followed on Soweto's dusty streets, how a militant raised on those streets remained so much of a perceived threat even in death, that his funeral was subject to specific and official restrictions.

As Johannesburg's anti-apartheid Weekly Mail reported at the time: “Restrictions published in a special Government Gazette [where new State of Emergency measures were announced] forbid flags and banners, amplification equipment, non-clerical speakers and the attendance of more than 200 mourners at the funeral of Motau, gunned down two weeks ago in Swaziland”.

“Motau” was Peter Sello Motau. He left Soweto on Christmas Eve 1975, as a militant teenager, radicalised at school at a time when street radicals were known as “comrades” and led the illegal township rebellions against apartheid. The next his parents heard of him was in a telegram from the ANC in exile more than 11 years later. Their son had been killed in an ambush in Swaziland, the tiny kingdom that borders South Africa. His assassins, South Africa’s post-apartheid Truth and Reconciliation Commission heard much later, were members of a secret South African Police hit squad.

Peter Motau had become a regional commander of Umkhonto we Sizwe, known colloquially as MK, the ANC's military wing co-founded by Nelson Mandela. From outside the country, Motau directed guerillas operating in the east of South Africa. Peter Motau left behind a wife and two children in Maputo, the capital of Mozambique where he'd made his home.

His car was ambushed in Swaziland, directly bordering both Mozambique and South Africa, while on an MK mission. Also killed was Joe Thabane, a prominent MK leader. They were shot at point blank range after the car was forced to a halt in what was described as a “bloody ambush”.

This was the work, a court heard in 1994, of South Africa's most notorious apartheid-era political assassin. Eugene de Kock headed a secret police unit called C10, also known as the Third Force, which kidnapped, killed and tortured anti-apartheid activists both within and outside South Africa. De Kock, darkly nicknamed “Prime Evil” in the South African press, was sentenced to more than 200 years in jail. He is now out on parole.

De Kock has always denied the death of Peter Motau was his work. He’s said it wasn’t “his style of doing things”. De Kock has also told journalists, almost nonchalantly, “The possibility that I would have okayed it does exist.” What is beyond question is that for apartheid South Africa, Peter Motau was deemed such a threat that secret forces were mobilised for a cross-border raid and a political assassination, sanctioned by the state.

Today he's regarded as a hero. Indeed, in April 2016, Peter Motau was posthumously awarded one of South Africa's highest honours, the Order of Mendi, for bravery.

On ZA87 you'll hear how his fellow Sowetans sang and danced to honour him just days after his state-sanctioned assassination, despite the official restrictions and despite the deliberately intimidating presence of police in armoured cars and in helicopters. There is no disguising the admiration for the ANC's guerillas, even though “furthering the aims of the ANC” was a serious crime and even though police could, under the State of Emergency, detain anyone for any length of time without giving a reason.

ZA87 is a unique audio document, an all-too-real spontaneous opera of the streets. The clicks and bumps of the day's recording remain, the hiss of the original cassette can be heard. The reporter takes audio notes. ZA87 forms a companion piece to Nigel Wrench's ZA86, also released by The Tapeworm.


Side A:
Seen – “This is the devil’s government"

David Mankurwa Motau, a grieving father and himself an activist, speaks before his son's funeral. The restrictions are severe: no more than 200 people and no political speeches. As David Motau notes, he breaks this stipulation. “I'm really glad I've managed to see my son.”

Outside – and despite the restrictions – the militant freedom songs start. The words to these are never written down. Everyone knows them. Among today's is “Hamba Kahle Mkonto”, a song of praise to Umkhonto we Sizwe, the ANC's military wing of which Peter Sello Motau had become a top operative. MK, as it was often known, translates as “Spear of the Nation”.

Safe journey spear
Yes spear
Spear of the nation
We, the members of Umkhonto are determined
To kill
These Boers


The South African Police, not renowned for their restraint and given wide powers under the State of Emergency, were never going to keep their distance for long. A helicopter and multiple armoured cars arrive to the sound of sirens. A police officer – one of “these Boers” - sends away the cameras of the international press. Mourners are undeterred, singing “Senzeni na?”, “What have we done?” as the original cassette's Side A ends. ZA87 follows suit. 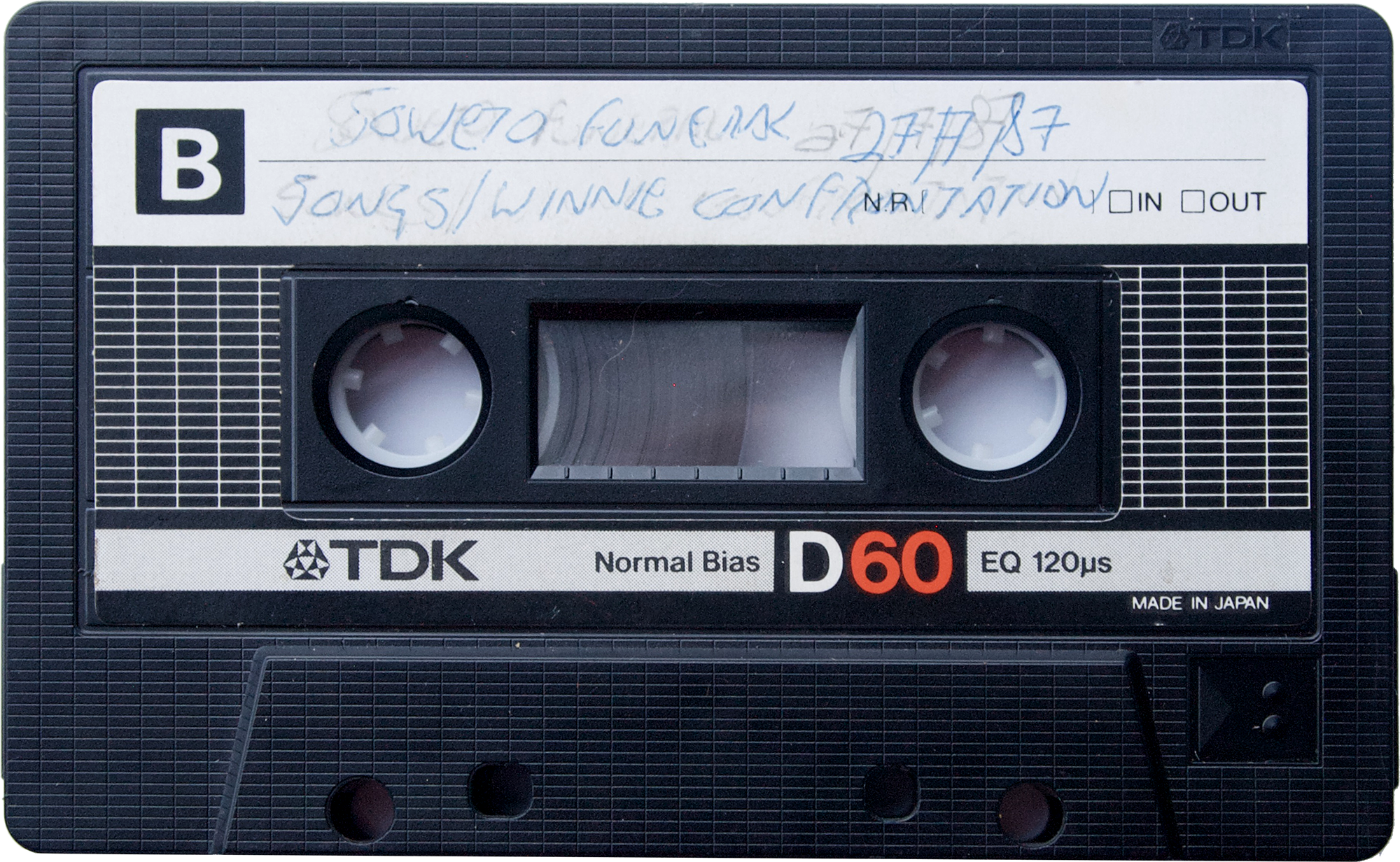 Side B:
Unseen – “You want him to disappear”

The TV and stills cameras are off, officially banned. Nigel Wrench's Marantz is still recording.

There's a toyi-toyi dance in the dusty streets. The toyi-toyi reflected the fighting spirit of Umkhonto we Sizwe. It was reputedly even used to train ANC guerillas. You can hear the shouts of “Viva Umkhonto Viva!” spontaneously breaking out. This is the funeral - for his fellow Sowetans - of a freedom fighter, a hero of the struggle against apartheid.

There are shouts of “Amandla! Awethu!”, “Power! To the people!”

A praise song for Nelson Mandela is in English, using his first given name Rolihlahla. “Forward with Charter” references the 1950s Freedom Charter which declared “The People Shall Govern” and became the core document of the then legal ANC.

By the graveside, the ceremony ends with Nkosi Sikel' iAfrika (God Bless Africa), the anthem of the ANC and now part of democratic South Africa's national anthem.

Winnie Mandela is there throughout the day. She isn't allowed to speak to the crowds. Nigel Wrench's microphone hears her, and witnesses what happens next. A quiet voice says, “Give me the tape”, as a fellow reporter takes the cassette to safety. ZA87 ends with this comradely gesture.

Nigel Wrench is an award-winning journalist whose career began in South Africa under apartheid. He is the winner of a Sony Award for Out This Week, BBC Radio's first national lesbian and gay news programme, and a New York Radio Award for BBC Radio 4's Aids and Me, chronicling his experience of living with HIV. "Few journalists have quite so intimately captured the essence of their era's great moral panics as Nigel Wrench" (The Quietus).

A more detailed biography can be read on Wikipedia.

Melissa Wrench is a student at Stellenbosch University completing a degree in BA Visual Art with a major in Fine Art. As an aspiring South African artist, she collaborated with her uncle to create a visual accompaniment to ZA87. 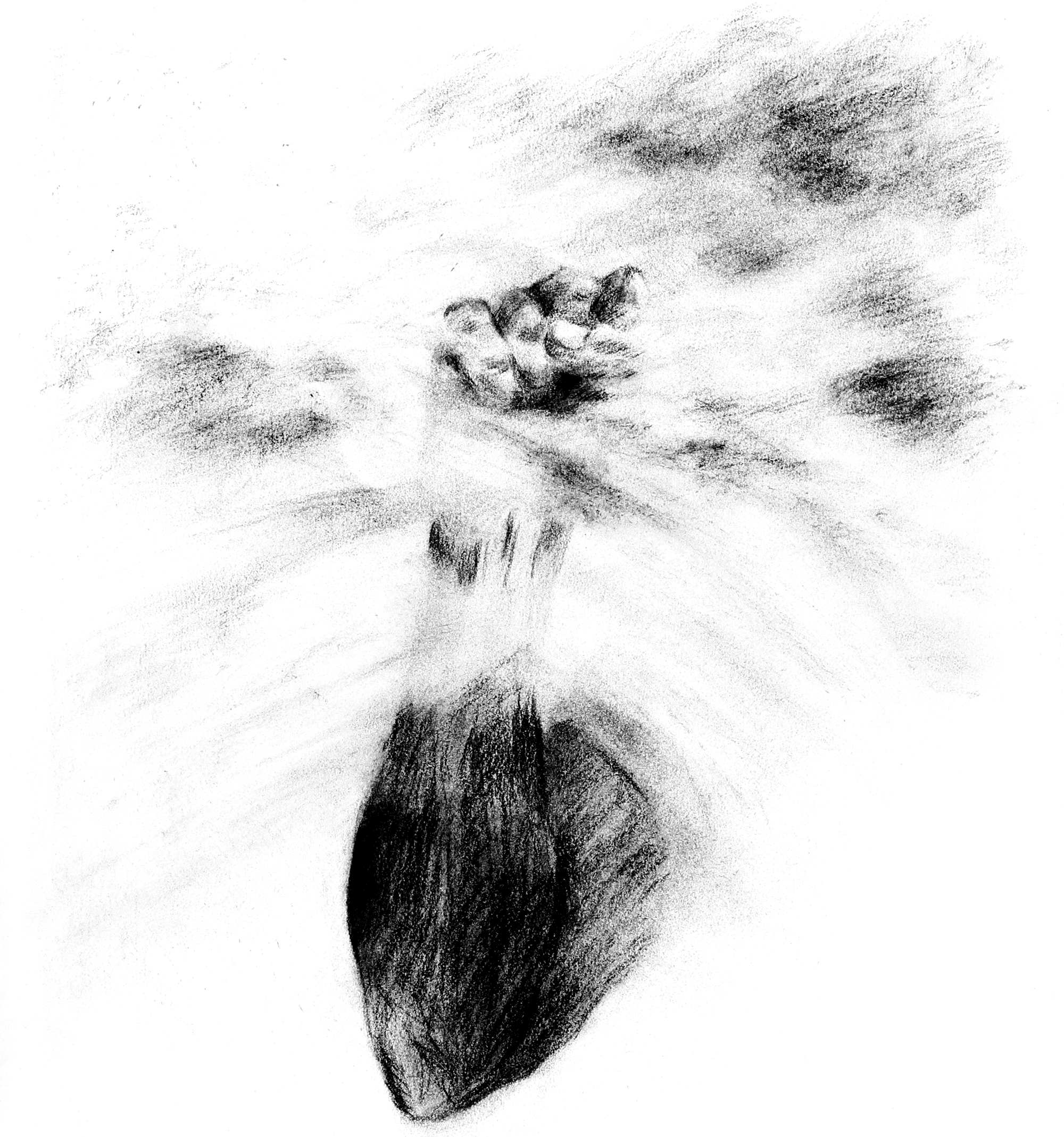 Having been born in a post-apartheid South Africa, a broad, academic overview of the National Party’s ‘total onslaught’ in the 1970s and the brutality of the 1980s was routinely, and rather banally, covered in our education. When confronted with the reality of the political funeral recorded in ZA87, I was overwhelmed by the way the apartheid government and police officials dealt in the erasure of freedom. My heart broke when I heard Winnie Mandela say in a moment of bitterness, “He is going to disappear like all the 3000 that are behind bars for nothing. You want him to disappear.”

I knew I wanted to foreground the resilience of funeral attendees, while also speaking to a larger united struggle. In mourning the death of a youth, raised fists, the symbol of black power, undoubtedly accompanied the toyi-toyi and anti-apartheid songs about freedom and hope. However, the police official’s blatant censorship prevented this visualization of peaceful deviance from reaching the media.

An idea was formulated. A single fist in a charcoal medium that accommodates the capturing of the dust kicked up into the sky through the movement of the toyi-toyi while being sensitive to the solemnity of the occasion. Although the forearm is partially obscured, the clenched fist emerges defiantly through the dust clouds and into the light.

ZA87 is now available to purchase on cassette only in an edition of 100 copies. It is available while stocks last from The Tapeworm’s Bandcamp.

Nigel Wrench's previous tape for The Tapeworm, ZA86, will be available to download as part of The Digital Archive of Tapeworm from 12 March 2021.